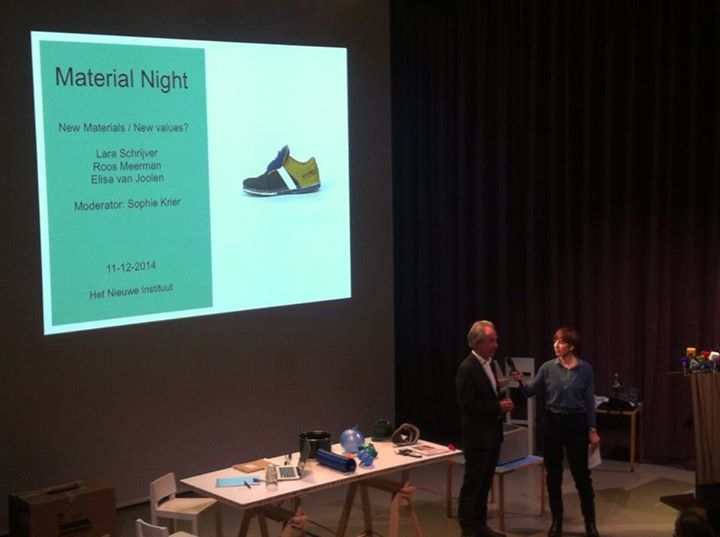 Last night I had the pleasure to moderate Material Night: New Materials / New Values? in Het Nieuwe Instituut, in Rotterdam. The idea with these evenings is to build a context that allows for collective reflection on current material research and experiments. The exact setting and format are different every time, in order to keep things exiting… The last Material Night that I moderated was The Workings of Wood, last June. And the next one is scheduled for March 12th, and will address plastic ethics and esthetics…

To get into a reflective mood, we first screened the documentary Docutopia, a rich and intriguing collage of futuristic film scenes and adverts dealing with the notion of utopia. The film is based on a script written by architecture historian Lara Schrijver for Bureau Europa’s 2014 spring exhibit Coming Soon / Real Imaginary Futures. It is currently screening in Z33 in the exhibit Future Fictions.

After hearing about Lara’s motives for writing the script, such as the different ways in which, though out the history of cinema, we have envisioned utopian worlds and systems, we moved on to part two of the evening, which we had give a more informal, studio visit-like character. Designers Elisa van Joolen and Roos Meerman, both nominees of the New Material Award, were brave enough to accept my invitation to share the process, doubts and agenda’s behind their material research projects 11×17 and Aera Fabrica. We thus looked at video fragments, fact sheets, time lines, mind maps of stake holders, and budget outlines: all the messy, sort of ugly or unhandy stuff a design process is made of, but which we never hear about in the design glossies.

Thus it turned out that 11×17, which could be superficially read as a –very fashionable–fashion recycling project, actually deals with something much more interesting, which is to decrypt, and cut through the hierarchy of the fashion industry by literally piecing together low-end, middle-end, and high-end garments. As design researcher Tal Erez, who joined us with a short video statement, rightly pointed out: the value of Elisa’s research is that it dissects the power structure of a system, thus making it visible (and ideally, legible) for us humans. And when we are knowledgeable, we can act. Which is exactly what the powers in force will always try to stop us from doing.

Interestingly, the results of the research (Inverted Footwear and 11×17 Sweaters) are not for sale: Elisa choses to barter them. In this universal contract format lies however potentially much more value than has yet been explored by Elisa; if I’m correct, the barters have been one dimensional so far, involving only clothing as a trading element. But of course bartering, as humanity’s history shows, can be much more complex than, as a contract between two or more parties. ‘Room for manoeuvre’ is thus perhaps the best way to thus describe the intrinsic value of 11×17. As design critic Ed van Hinte commented: the project is not about clothing or fashion, it’s a model to stimulate collaboration between different (competing) hierarchies. An exciting research that proves that design is able to address power structures, and to make use of design expertise (making products, and thinking about use) in doing so.

Aera Fabrica is at the moment primarily an inspiring, experimental finding about how to expand the signature (and ideally, the use of) 3D printing, and include nature (and thus randomness) in the making process; extrapolated, this graduation research could possibly grow to become a kind of 4D printing, as polymer expert Gilbert Curtessi of Transmare.nl, present in the audience, commented. Last November, Roos won the New Material Fellow. This research grant will allow her to deepen, and to contextualize her research during the next six months, supported by Het Nieuwe Instituut, Stichting DOEN and Materiaalfonds, the three partners behind The New Material Award. An initiative that I warmly welcome, because as the concluding discussion showed, context is essential in determining the real value of something.

In other words how to turn matter into something that matters….

The evening ended on a speculative tone with 2080, a short video by one of my current master students in product design at the Ecole des Arts Décos in Paris, Florian Dach. It’s a fictional tale of resilience and survivalism, set in 2080, when the world has been “split in two after a succession of crises reinforcing social inequalities”, which makes a resilient community develop a “catalogue mondial” of tools to fabricate and improve objects of daily use.

Thank you Christine Vroom for the brainstorming on the line up, Bart Heerdinck and Irina de Graaf for production /communication, Bernard for the technique, and of course a big thank you to the speakers, and the filmmakers for letting us screen their work.